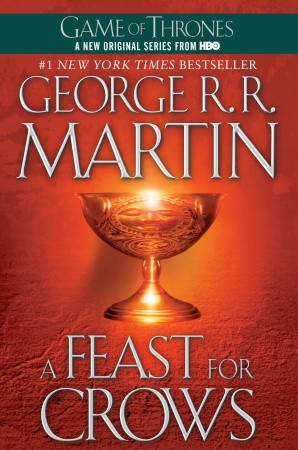 Had I started reading A Feast for Crows immediately upon finishing the excellent A Storm of Swords, as I was so tempted to do, I would have been sorely disappointed in the stark contrast between these two books. Whereas A Storm of Swords is momentous and significant, Feast is meandering and chooses to focus on the insignificant. Any cursory glance at the reviews for this book will inform you that GRRM leaves his most significant characters out of this installment, choosing instead to focus on secondary characters and new ones. In and of itself, I don’t think this would be a terrible thing, but in the end they aren’t compelling enough to carry the novel.

For much of the book, it felt as though GRRM simply ran out of creative steam. The unfoldings in King’s Landing are much the same, just with different pieces in play and a focus on Cersei undoing herself. Arya’s sections are fairly monotonous and straightforward – unfortunate, because I found her sections in the previous three books to be exceptionally clever and fun. It feels like a missed opportunity too, because her time training with the assassin’s guild of The Faceless Men seems ripe for wonder; instead it bores. Samwell’s passages serve some required plot advancement as we follow him moving from the Wall to the Citadel, but that is about it.

I did enjoy following Jaime on his newfound quest for honor, and also to restore the combat skills he lost along with his swordhand in Storm. Brienne’s quest to find Lady Sansa was engaging, and I think she’s a deeper character for it, but unfortunately all those pages ultimately leave the reader with nothing to show for having read them. It was exciting to learn more about Dorne, but unfortunately those sections were plagued by too many minor characters to keep track of without great effort.

The writing was weaker too – from the prologue, I had my concerns, and though the rest of the book is not that bad, GRRM adopts certain strategies that grate by the end of the book. He punctuates almost every paragraph of dialogue with the character’s internal thoughts, like this. He also betrays the realism and attention to detail in the earlier offerings by allowing implausibly chance encounters of the story’s characters in distant lands.

Ultimately, though, the core problem is it seems that GRRM just doesn’t know where to take the story, and so he bought himself time with this book. Just as the characters wander all over a desolate Westeros without much point, so does the reader trapped in his sprawling plot. There were certainly times I enjoyed this book, but in the end, I’m left feeling a little cheated, like there wasn’t much redeeming value in return on my time investment.

The question, then, is should someone read this book? The completionist in me would advise any GoT fan to see it through, especially in the hopes that the rest of the books will be better. But standing on its own, I don’t think the tale warrants the pages and time required.