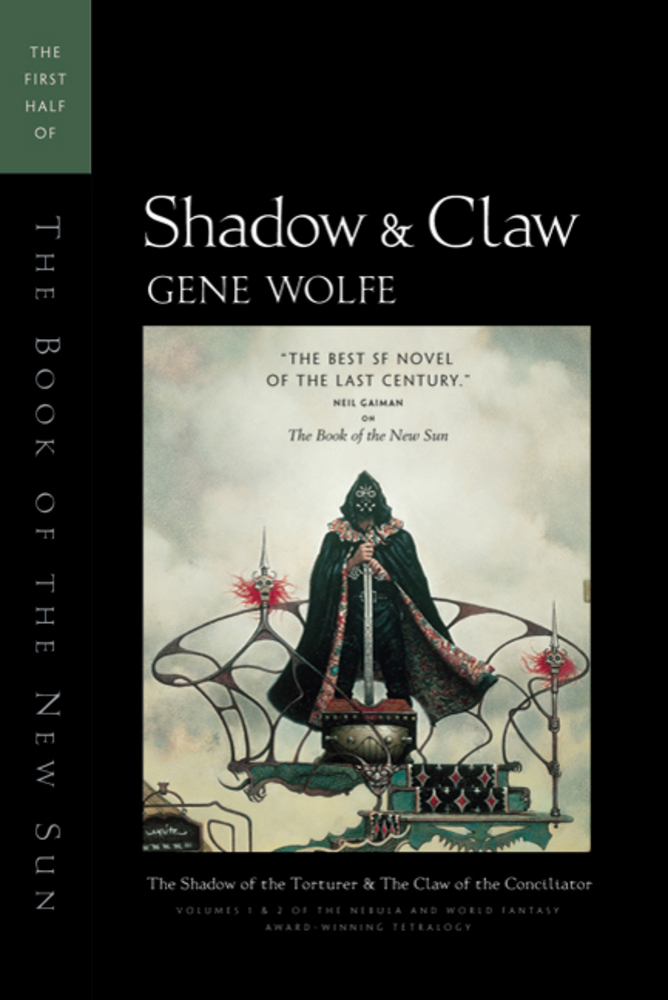 Shadow and Claw made for a very rich and unique reading experience — one that was simultaneously challenging and enthralling. Set in an antiquated future, where the sun is dying and mankind has peaked, Severian — exiled member of the Torturer’s Guild — begins his account of leaving the citadel he’s always known for the greater world beyond.

The world he explores and recounts to the reader is rich and fascinating, but reluctant to give up its secrets. Language plays a very strong part in this, as the book is positioned as author Gene Wolfe translating Severian’s recount. In so doing, Wolfe is translating a history from the future, so we get a mix of words that are either arcane or invented: fuligin. carnifex. hipparch. Words like these are presented in a way that I found satisfying: discovering their meaning from surrounding context is a mode of discovering the world that Severian (and therefore we) get to reside in.

A third of the way in, I realized that though the language and world is dense and intricate, the plot itself is quite simple. It unfolds as a series of anecdotes and memories which are cohesive but do not drive to any form of climax. This made for a strange feeling as I completed The Claw of the Conciliator: that I had travelled so far, but also gone nowhere. But perhaps that is the mark of just how good this book is, for Severian was likely feeling exactly the same way.

Regardless, it’s a rewarding read and would probably make for an even more rewarding reread. At the finish of Claw, half way through the tetralogy, I have a number of remaining questions (spoilers follow):

Even with my curiosity around these questions and more, I’m uncertain if I want to invest the time to read the remainder, The Sword and the Citadel, to find out. There’s a good chance my questions may simply go unaddressed, or be answered so matter of factly as to seem trivial. But that’s part of the magic of this book, and probably my key takeaway: I’d read it for the experience, the lasting imagery (the alzabo extract will be very hard to forget), and the journey — not the destination. Don’t turn the pages in a rush — you’ll only reach the end and realize the most interesting parts were along the way.