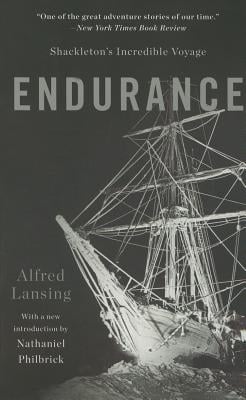 In 1914, Ernest Shackleton set sail for Antarctica with a team of twenty-seven men, aiming to be the first party to cross the continent overland. But when the Endurance became locked in pack ice, Shackleton’s objective changed from setting a new record to simply getting his team out alive.

Endurance: Shackleton’s Incredible Voyage recounts his team’s legendary feats in doing so, from schlepping across treacherous ice floes, to sailing a lifeboat through the roughest seas in the world, to climbing across South Georgia Island’s presumed impassable interior in order to finally reach help.

Individually, each of these would make for an incredible achievement. Taken together, all whilst facing extreme cold and starvation, they are truly extraordinary. Shackleton prevailed against seemingly impossible odds and made history by getting every single one of his men home safely.

How did he do it? What were the qualities that caused Sir Raymond Priestley, another Antarctic explorer and contemporary of Shackleton’s, to proclaim:

For scientific leadership give me Scott; for swift and efficient travel, Amundsen; but when you are in a hopeless situation, when there seems no way out, get down on your knees and pray for Shackleton.

Here are some aspects of Shackleton’s leadership that struck me while reading this fabulous book.

Do What You Love.

To be truly great at what you do, you have to love doing it. Shackleton loved exploring the Antarctic.

His first expedition was under Robert F. Scott in 1901 and got the closest to the South Pole to date. He then returned with his own expedition in 1907, aiming to reach the Pole:

With three companions, Shackleton struggled to within 97 miles of their destination and then had to turn back because of a shortage of food. The return journey was a desperate race with death.

Despite this life threatening close call, Shackleton was already considering his next expedition even before returning home. He was only fully alive when he was exploring the Antarctic.

Figure Out What Really Matters. Let Everything Else Go.

When disaster strikes and the Endurance becomes trapped in the ice, Shackleton fully commits to getting his men home safely. This may seem obvious, but less so is how he jettisons his concerns over everything else. Merely ensuring his men’s survival is going to take every fiber of his being, and so distraction means death.

Early on, before the Endurance gets crushed and when it is merely stuck, Shackleton could still have pursued his original goal of crossing the continent. But to do so would have incurred additional risk for the rest of his men, and since saving them had become his raison d’etre, he didn’t even consider it. This is very significant, as he’d spent over two years preparing (and fundraising) for the trip, and felt this expedition was the last real opportunity for glory in the Antarctic.

In addition to letting go of distractions, Shackleton seemed to let go of his fears. He must have carried them deep down, but he was so wholly set on getting everyone home safely that there simply wasn’t room in his mind for considering the possibility of failure. This prepared him to lead his team through seemingly impossible challenges that under any other circumstances he and his men wouldn’t even consider undertaking.

It may be called Shackleton’s Incredible Voyage, but it couldn’t have been completed without a phenomenal team. Shackleton built his team around a nucleus of tested veterans, all 5 of whom he’d been on previous Antarctic expeditions with. These were the best of the best, and Shackleton had the first hand experience to be sure of it.

He selected Frank Wild as his second-in-command; if the expedition were a startup, Wild would be his cofounder. Wild was one of Shackleton’s three companions in the 1907 race for the pole where they faced starvation, and Shackleton “had developed a tremendous respect and personal liking for him”. Similarly,

Wild’s loyalty to Shackleton was beyond question, and his quiet, somewhat unimaginative disposition was a perfect balance for Shackleton’s often whimsical and explosive nature.

This complementary relationship proved key time and again, especially when circumstances required that they split in two, with Shackleton leading one group and Wild the other. It’s hard to imagine things turning out the way they did if Shackleton didn’t have Wild to depend on.

Lead By Example. Put Your Team Before Yourself.

Shackleton is every bit a member of the team. He seems to always take the first night shift watching for deadly cracks in the ice beneath them. He does his full share of the menial chores, like ferrying the pot of hoosh (yum…) across the freezing cold between the stove and his tent mates. He takes part in all of the men’s social activities, including teaching many of them how to play bridge.

He never asks anything of the men that he won’t do himself. When he implores them to travel as light as possible, he dumps his own personal belongings into a small pile of things to be left behind. Shortly thereafter, that small pile grows into a mountain as the rest of the men follow his example.

He demonstrates that the team’s safety is his top priority in everything he does. When the ice that Shackleton and a handful of men are camped on splits off from the main floe, Shackleton sees that every man makes it safely across before he sees himself across.

This unwavering commitment to his men engenders their complete faith in him, which they honor even when he makes big decisions that they don’t all agree with.

Shackleton is extremely decisive. Before bed, he will write in his journal that he is considering something, and the next morning he will announce it to all hands. He makes hugely difficult decisions on imperfect information, and he never lets uncertainty overwhelm him into inaction.

Instead, he simply makes the best choice he can with the information he has. The key to this approach, though, is how he revisits decisions and quickly course corrects when he gets new information.

After the men abandon the Endurance, they camp on an ice floe they’ve affectionately named “Ocean Camp”. The hope is that the wind and current will blow the ice pack in the direction they need to go, helping them reach the Palmer Peninsula. However, after weeks of waiting, they’ve made little progress, and morale is declining.

Shackleton therefore decides that instead of relying on the wind, they will take matters into their own hands and march across the ice pack. This is not a popular decision, and many members of the party feel they should stay put and bide their time.

It turns out to be a bad call. After five days of exhausing struggle, the party has only covered nine miles out of the 200 required to reach the peninsula.

Rather than doggedly stick with the decision, Shackleton reassesses and reinstates the waiting strategy. They form a new camp and return to relying on the wind to blow them in the right direction. It does, and finally gets them far enough that they can take to their boats.

Once they do, over the course of five harrowing days at sea, Shackleton repeatedly updates their target based on the wind and currents. Initially, they aim for Clarence/Elephant Island; then, King George Island; then Hope Bay at the tip of the Palmer Peninsula, and then finally, back to the original target of Elephant Island, where they ultimately land.

This wasn’t poor leadership or haphazard planning; this was high-resolution decisionmaking as conditions unfolded and rapidly changed, and it’s what ultimately saw them to land.

Shackleton doesn’t have to be perfect at deciding because he is really good at re-deciding. In this way, he ensures the party is always making forward progress towards its goal in the best way presently possible.

Once he makes a decision, Shackleton moves fast to execute it. He sets his team to action right away, which leaves no time for debate or second guessing.

More generally, he knows that time is of the essence, and that he is in a race against starvation and freezing to death. He brings incredible intensity to every single day. It is amazing how much you can get done, and in how little time, when you operate this way.

One striking example: Upon surviving the week long journey across the Drake Passage to reach South Georgia island, Shackleton rests for only a few days before setting out with a small party across the island’s interior. And upon finally reaching the other side, he waits even less than that before forging his rescue attempt for his marooned men.

Shackleton is a relentless force of nature.

I am rather tired. I long for some rest, free from thought. -Shackleton’s diary

Shackleton bears an incredible and lonely burden. He must always project absolute confidence to his men, which means he can’t ever confide his own fears and uncertanties to anyone else.

Beyond this, no one else is quite experiencing what he is. As expedition leader, he alone is responsible for the fate of the party, and so he alone knows what that responsibility feels like.

You Still Need Some Luck.

Even with all of the genuinely great leadership described above, there are still inflection points where the expedition’s survival hinges entirely on luck.

At one point, while waiting out the wind on the ice, the party comes to the brink of starvation. With winter approaching, most of the wildlife has migrated, and there hasn’t been a successful hunt in weeks. Then, miraculously, an entire penguin rookery moves onto their ice floe in the middle of the night, supplying them with all of the meat they need in their most desperate hour.

There are many examples like this - including that the wind didn’t just blow them out to the open sea, which was a very real possibility - but maybe the most remarkable bit of luck is at the very end of Shackleton’s journey.

Shackleton has made it across the pack ice; up the Weddell Sea to Elephant Island; and finally across the Drake Passage to South Georgia Island. Help is just on the other side of the island, but the currents are so dangerous they can’t sail around it. So, Shackleton and two men set out to cross the interior. This has never been done before and the island’s craggy peaks are considered impassable. Night is setting in as they reach the top and the three men are facing freezing to death at their elevation. There’s no time to safely descend, and even if there was, the visibility is so poor that they wouldn’t be able to make out a path.

So Shackleton rolls the dice and proposes their only option: that they slide down into the abyss. After almost two years of struggle and meticulous decision making, the success of their voyage literally comes down to sliding on their butts and hoping they don’t plummet to their death. Luck was on their side and they smoothly slid until safely bottoming out 2,000 feet lower in a snowbank.

Shackleton’s family motto was Fortitudine vincimus – “By endurance we conquer.” Nothing better epitomizes his incredible voyage. There are so many moments where sheer perseverance is what sees him and his men through. This serves as a powerful example for all of us. When we are in our own struggle, underlying everything is to just keep going. You can’t succeed if you stop.